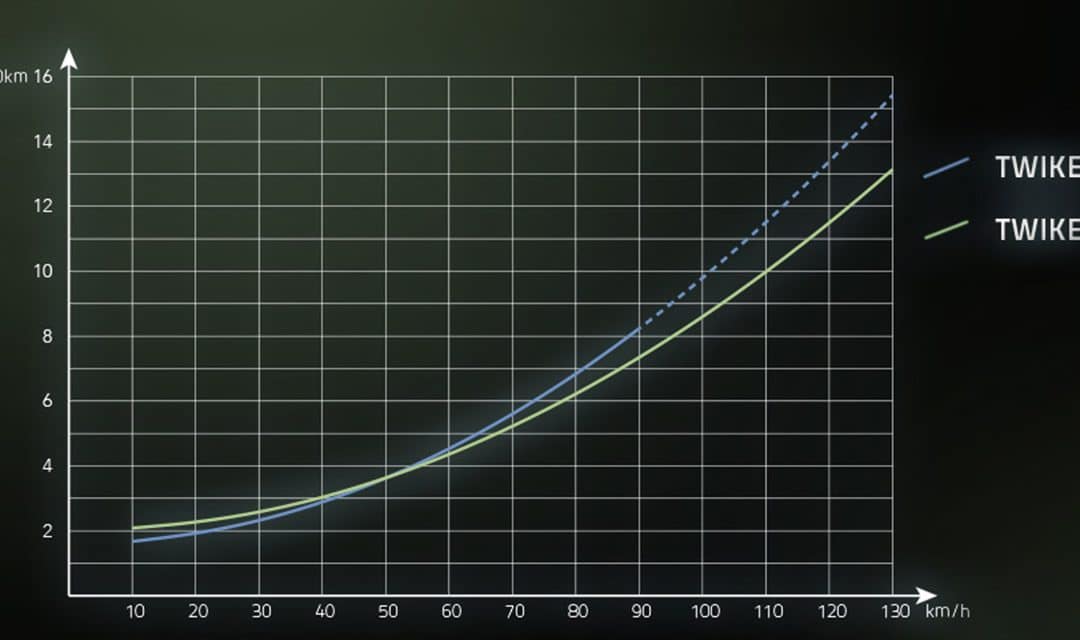 Compared with the TWIKE 3, the TWIKE 5 will have a lot to learn in terms of driving safety, comfort and dynamics. Nevertheless, it is a matter close to our hearts not to fall into the typical “bigger-faster-heavier-more-consuming” trap.

For this reason, we are optimizing every component of the vehicle in order to be able to compete with our extremely fuel-efficient TWIKE 3. The diagram illustrates the key to success: at low speeds, the TWIKE 3 exploits its advantage of unrivaled light vehicle weight; the resulting rolling resistance leads to minimal energy consumption here. As soon as speeds increase, however, other effects dominate: The TWIKE 5 benefits from its even better aerodynamics as well as the higher efficiency of the electric system, so that at constant speeds from around 50 km/h there is a clear consumption advantage.

In a nutshell: Our recently set range record of 613km would be completed by the TWIKE 5 with the largest battery equipment with about 20% higher average speed. The – ultimately decisive – energy balance from the grid is additionally improved thanks to the higher efficiency during charging.

According to the current planning status, the theoretical consumption of the TWIKE 5 is about 7.3kWh/100km at a constant speed of 100km/h.

What are the reasons for the efficiency of the TWIKE 5?

The low energy consumption of the TWIKE 5 results from the low vehicle weight of under 500 kg, the low cw (0.24) and a small frontal area (1.7 m^2). The high efficiency of the synchronous drive and a modern inverter also make a significant contribution. Also, with a rated voltage of 350V, the Lion battery has extremely good efficiency and hardly any thermal losses. All together, this leads to a WLTP consumption of about 7.3 kWh/100km and the already mentioned about 6 kWh/100km at a constant speed of 80 km/h.