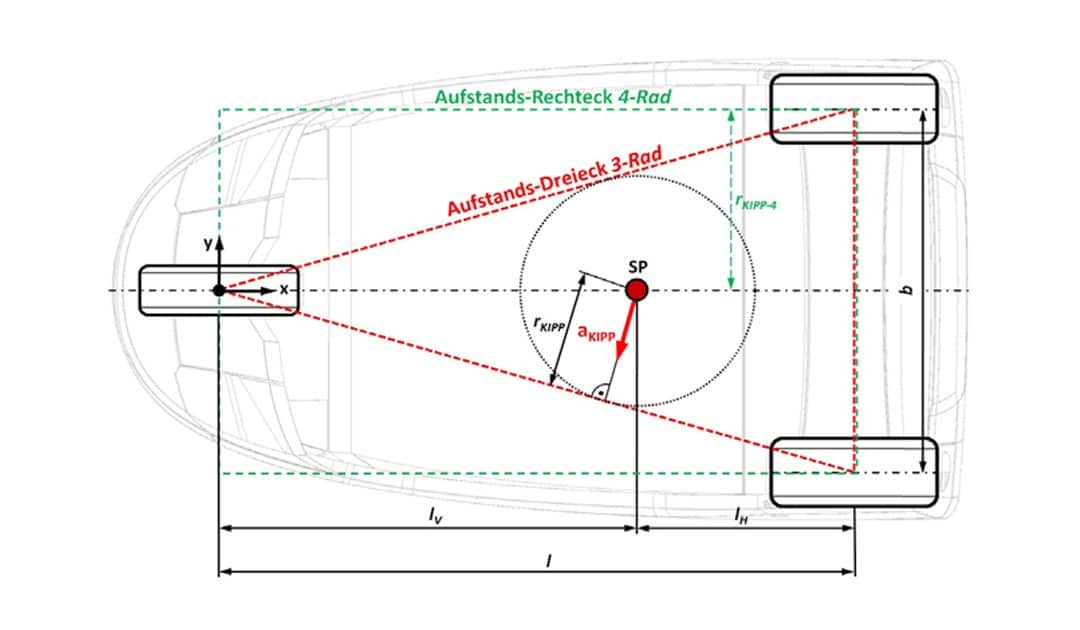 Why are the two wheels on the TWIKE located on the rear axle (delta arrangement) and not on the front axle (tadpole arrangement)? The only argument in favor of two wheels at the front would be better support of the rolling forces during cornering and simultaneous braking maneuvers. However, this maneuver is just as controllable in a delta arrangement (one wheel in front, two wheels in back) if the vehicle’s center of gravity is organized far to the rear and low at the same time. Advantages resulting from the delta arrangement, such as less critical loading of additional mass (luggage) and a much higher level of safety in the event of a rear wheel failure (tire blowout, loss of pressure, but also simply slippage due to leaves on the road), make the vehicle much safer to operate and allow impressive driving maneuvers.

The following facts need to be understood: The rear axle guides the vehicle and keeps it on track. If the rear axle loses the ability to support lateral force against the road, the vehicle automatically turns about the vertical axis and becomes uncontrollable. If only one tire is available on the rear axle in this situation, then a number of fallback possibilities resulting from the redundancy of a second rear wheel are eliminated in terms of safety. In the speed range up to 45km/h for e.g. disguised recumbents, the impact of a resulting accident may still be statistically justifiable. However, if higher speeds (highway) and greater prevalence and normality of three-wheeled vehicles are addressed, this scenario must be better thought out and prepared.

In order to hurry this possibly now in the room question already: No, a tire blowout of a single front wheel also results in a suspension of the ride (as with any four-wheeled vehicle), but it does not automatically initiate a pirouette, but allows a reduction of speed and in most cases even evasive steering maneuvers with extremely increased steering force.

By the way, the chassis solution of the TWIKE 5 has not much in common with the TWIKE 3 except for the delta arrangement (e.g. de-dion rear axle with turn-slide coupling, single-arm swing arm at the front axle, 2-arm sidestick steering, …). The center of gravity is also much lower again. The TWIKE 4 already demonstrates impressive stability at high driving speeds and fast corner changes, which make even sporty four-wheeled vehicles look bad in demanding driving maneuvers.

To look at examples from practice, which is particularly sensitive in terms of safety, we should refer to the aircraft industry: The tail wheel solution (one wheel at the rear) exists in aviation. In practice and industrial flying, however, the delta arrangement (one wheel in front) has become accepted on the basis of the simplest safety considerations and is used convincingly every day.

Incidentally, with two wheels at the front, there would also be no more room for the driver and front passenger next to each other, as the passengers would have to sit further forward in favor of a center of gravity to be placed further forward, and they would have less space available with their feet inside the wheel arches. In practice, however, this would not usually become a space problem, because in the packaging phase the wheel arches would then simply be placed further out, resulting in a wider vehicle.

We consider the solution found for the TWIKE 5 to be the best of all possible three-wheeler variants and are very proud of the impressive driving performance and dynamics.