Up to 500 kilometers range thanks to VDA-format battery 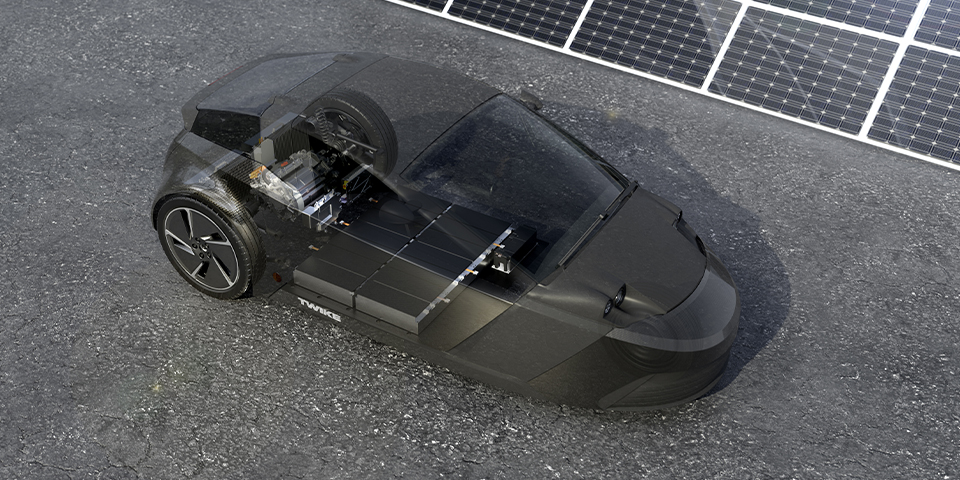 While electric motors are already recognizably superior to the classic combustion engine today, mobile electricity storage continues to present manufacturers with challenges. Of central importance here is the relationship between size as well as weight and storage capacity. As a result, the currently available battery technology often forces manufacturers to compromise on the range of their vehicles. TWIKE has managed to compensate for the disadvantage of the higher weight with advantages elsewhere.

At TWIKE, too, we have repeatedly been confronted with the question of how to reconcile limited space, desired weight and electric range by choosing the right energy storage system during the course of our development history, which now spans more than twenty years.

The limited space in the underbody proved to be a particular challenge in the search for the right energy storage system for the TWIKE 5. After the failure of an initially favored supplier and the resulting intensive research, the VDA format, which was initially ignored, finally presented itself as very suitable. Currently, lithium-ion technology is unrivaled in electric car applications. The capacity and voltage of a VDA module is 51 Ah at 44 V. The standard module can be connected in parallel and in series as a group structure to extend voltage and capacity up to 36 kWh at 352 V.

With a height of 108.5 mm, the alternative required only a modification to the sandwich structure of the battery box. Once again, it proved to be an advantage that TWIKE 5 can completely dispense with active cooling thanks to the low stress on the battery while striving for high durability. A surface heating system has only been integrated into the battery box for gentle charging at sub-zero temperatures.

As a positive side effect of the necessary adjustments, the stiffness of the main frame has also increased. In addition, the battery electronics have been integrated into the sandwich body, reducing assembly times and freeing up additional storage space behind the seats. As a result of the switch to the new battery format, less small-scale tuning of the charging capacity is possible. The TWIKE 5 will therefore only be offered in two versions: one with an energy content of about 18 kWh and a range of about 250 km and a second with double the capacity and a range of 36 kWh or 500 km.

As a relevant compromise, the VDA format is recognizably heavier. However, we were able to offset the negative effects of the additional weight with aerodynamic modifications. Furthermore, the additional battery weight causes a lowering of the vehicle’s center of mass, additionally improving the TWIKE 5’s driving dynamics. “We have learned over the years to always face new challenges,” Möscheid explains. “After all, we are treading new paths with TWIKE, where we are a few steps ahead of the automotive industry in many areas and have to react correspondingly flexibly to short-term changes.”

When choosing the battery manufacturer, TWIKE is in the comfortable situation of being able to choose from different suppliers. to be able to select. The upcoming tests, which the batteries of the different manufacturers will undergo, will be the deciding factor as to who will be awarded the contract.