What if … TWIKE 5 on the Oschersleben Racetrack 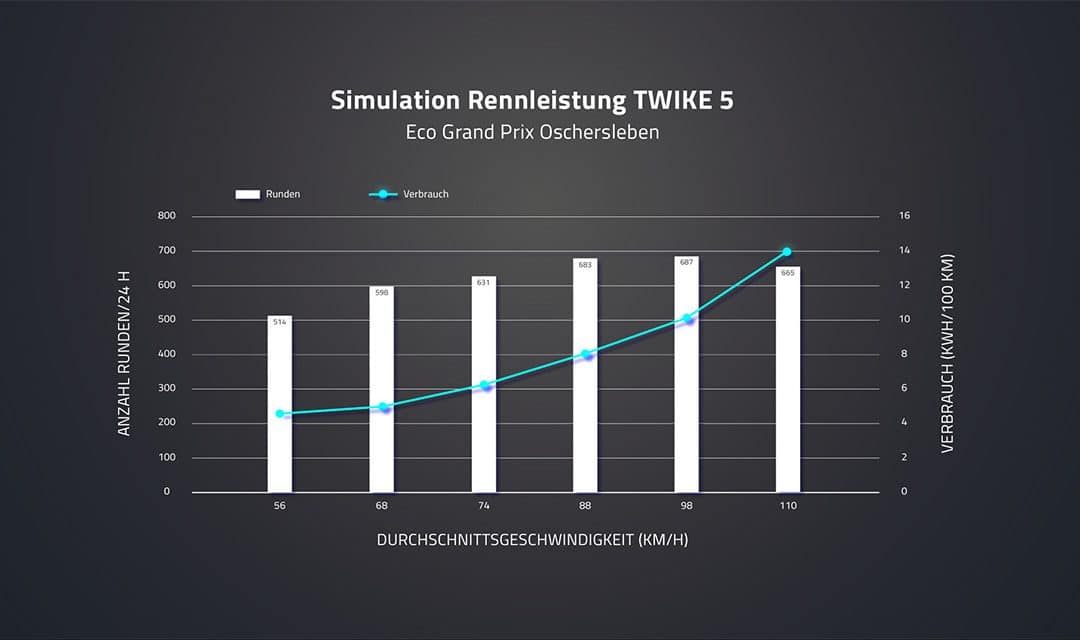 Is the TWIKE 5 really more efficient than the TWIKE 3 in everyday use, even though the new drive will have more than 10 times the power and also significantly more torque?

The fact that aerodynamics has a decisive influence, especially in the upper speed range, has already been highlighted in previous reports and will accompany our developers until the start of production. However, the higher efficiency of the synchronous drive and the more modern power electronics play a major role in this lower consumption. We will take a closer look at this new drive system of the TWIKE 5 in a later article. 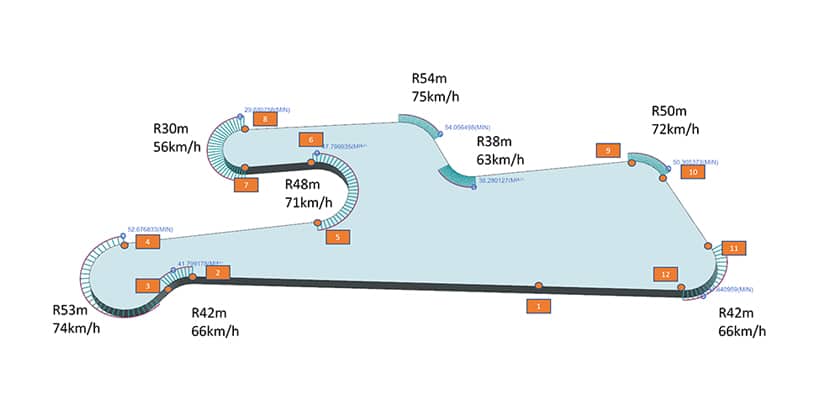 Not only on public roads, but also on closed-off courses, the ecoGP, for example, requires its participants to complete as many laps as possible within 24 hours. A course that is the same for all participants on a closed-off circuit and a strict set of rules, e.g. drivers must take a break after a maximum of 4 hours of driving time, practically force a participating racing team to change drivers, bring a high level of safety to the racing process and also allow the mathematical simulation of an expected race result. At least in theory. In practice, none of the mostly non-professional drivers will complete such consistent laps over 4 hours of driving time as the legendary racing driver Toni Mang did in his day. Nevertheless, the simulation gives important hints for an optimal driving strategy. And the result of this simulation already looks extremely promising for a TWIKE 5:

Could the team TWIKE Gerbil with the TWIKE 3 during the
Germany 24 Hours 2018 in Oschersleben
already in 8th place with 443 laps completed (ahead of Jutta Kleinschmidt on BMW i3s, 439 laps), the TWIKE 5 could even complete about 200 more laps under optimal conditions (see figure above).

The TWIKE 3 already has good prerequisites for this particular discipline of the ecoGP: Consumption is low and the top speed is slightly above the average speed to be aimed for. The maximum charging power of 22 kW prescribed by the regulations was provided at the race using an external charger. However, the negative effect for the TWIKE 3 was that the speed had to be reduced in the curves and subsequent acceleration processes drained valuable energy.

The TWIKE 5 would manage a significantly higher number of laps because, especially in the speed range above 60 km/h, the better aerodynamics and the improved electrical efficiency of the drive and integrated charging system would bring decisive consumption advantages. But the driving stability equivalent to a sporty passenger car would also allow smoother driving through curves and greater efficiency due to less fluctuating speed. If a relaxed average speed of 56 km/h were targeted, consumption of only about 5.3 kWh/100 km could even be expected (the TWIKE 3 required about 7 kWh/100 km at lower speeds). Every 10 km/h faster would push up the number of laps and thus the maximum driving distance within the 24-hour race, but unfortunately also the consumption and thus tends to increase the time at the 22-kW charging port.

If the mandatory driver change and one uncounted lap for each pit stop are also taken as a basis, the simulation results in a maximum achievable number of laps of 651 with a correspondingly rated distance of 1,585 km. We find this value sensational considering the limited charging power of 22 kW!