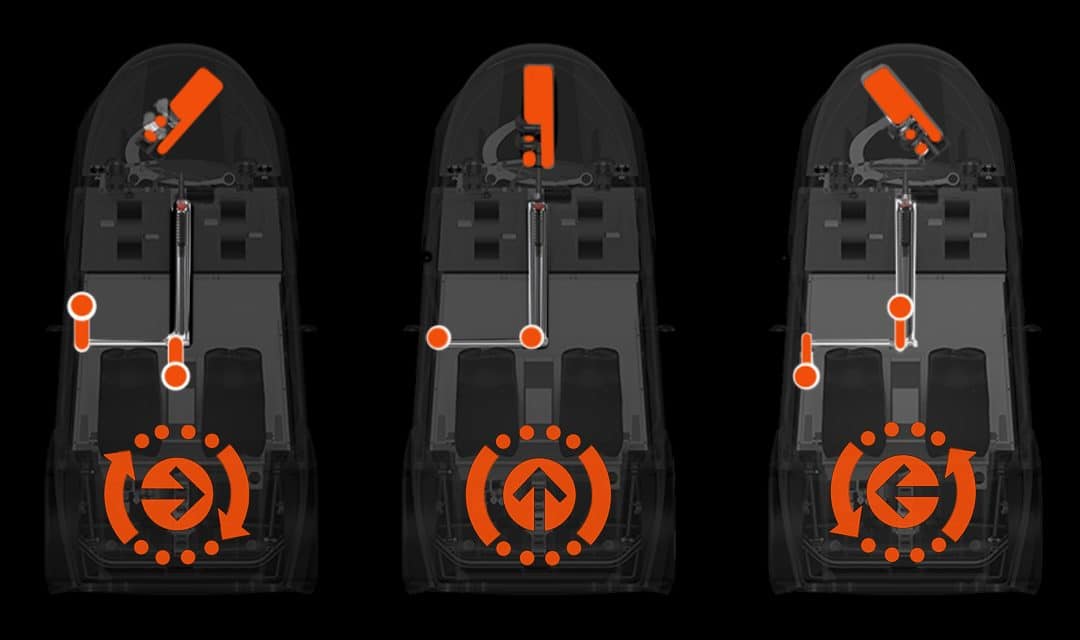 As much as the TWIKE 5’s novel steering will bring joy to its users, the official name will be Side-Stick-Steering.
In contrast to the TWIKE 3, the TWIKE 5 will also have its two steering levers and still allow at times to steer the vehicle with only one hand, whether with the left or the right. The direction of movement of the steering levers is extremely intuitive and similar to that of a conventional car steering wheel: Left hand pulling downwards to the rear steers to the left, right hand pulling downwards to the rear steers to the right. However, we also recommend “pushing into the curve” as in sporty steering of a normal car, i.e. initiating a right-hand curve by pushing the left lever forward, for example. This stabilizes your seating position – the squeeze keeps you better gripped in the seat – and you ride more stable overall. In good driving schools or also later following safety trainings this steering method is also taught for the normal car and can also be used with the TWIKE 5. With the TWIKE it also has a positive effect that the feet always rest on the pedal system and this also stabilizes the seating position – with normal cars this is usually only on one side of the clutch foot when you are not shifting gears.

The speed can be changed on both levers: On the right is a so-called driving potentiometer with which you can change the acceleration continuously, on the left are the cruise control buttons with which you can, similar to the control of the TWIKE 3, set your own desired speed or increase or reduce it by pressing longer.
Regularly used controls are integrated into the handles, such as the turn signal, on/off dimmer switch, windshield wiper wash function and a scroll and select function for the display.
To ensure that the pleasure of use is never spoiled, the surfaces of the handles are interchangeable (Alcantara, leather, natural fiber, wood,..) and the handles are heatable.
If you would like to get an impression of this new side-stick steering system, you are cordially invited to a test drive with the TWIKE 4 in Rosenthal! We look forward to seeing you!