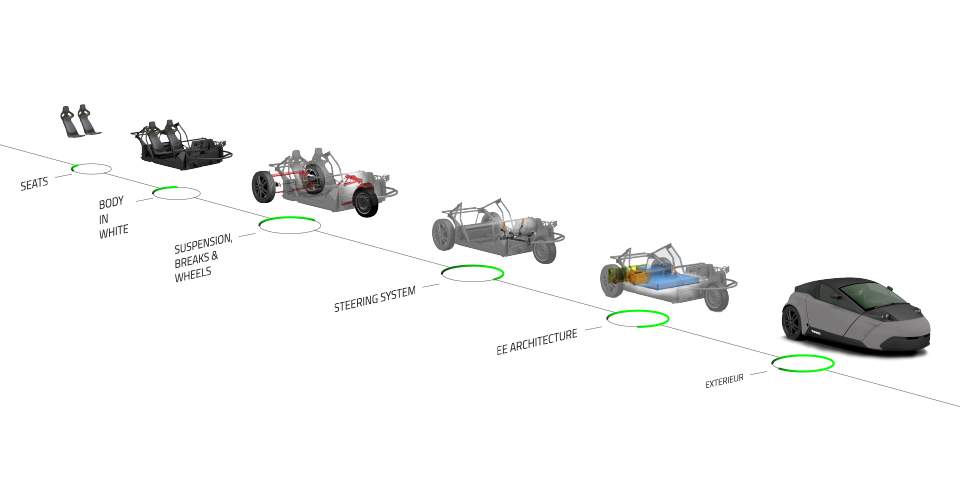 However, only a limited series of 500 units of the TWIKE 5 will be built. However, customers at the back of the list can move up with a deposit or otherwise secure a front seat in the follow-up series now. Of course, all purchasers are waiting impatiently for the start of series production and the TWIKE team is working flat out to ensure that this can begin before the end of the first half of 2023. A number of milestones on the roadmap still need to be ticked off before TWIKE can get started with production. In addition to the completion of the assembly hall, the setting up of the warehouses and workstations for preliminary and final assembly, which are required for the production steps to be completed in Rosenthal, is a prerequisite for being able to work. The list of other interim targets is now manageable.

2. set-up of driver test vehicles
In order for the newly developed vehicle to meet the requirements of safe driving dynamics, various tests and any optimizations to driver test vehicles are required. By this we mean prototypes which are roadworthy but do not yet necessarily have a fairing.

3. prototypes
As soon as the driver tests have been completed positively and the frame, chassis and drive system are deemed approvable by us and the accompanying experts, we can add the exterior to the driver test carriers and thus build two fully-fledged prototypes. We will present these prototypes to our customers and at the same time carry out final physical tests for ECE homologation.

4. ECE homologation
This is the technical term for the type approval of a vehicle, or the approval of a series vehicle in the EU, which is also accepted by some non-European countries. For this purpose we cooperate with the Luxembourg technical approval service ATEEL. The Federal Motor Transport Authority in Flensburg confirms the completeness of the required evidence and issues the EU approval.

5. conversion of pre-order into order
With the inspection of the prototypes, customers are given the opportunity to convert their pre-order into a binding order. This will be the final lever for the start of series production.

6 Start of series production
Once the go-ahead has been given, two vehicles are to be assembled daily at the Rosenthal plant once production processes have been ramped up. We currently expect to reach this point on the map in the second quarter of 2023. Within a period of twelve months, the planned 500 TWIKE 5s will then be produced and handed over to our customers.