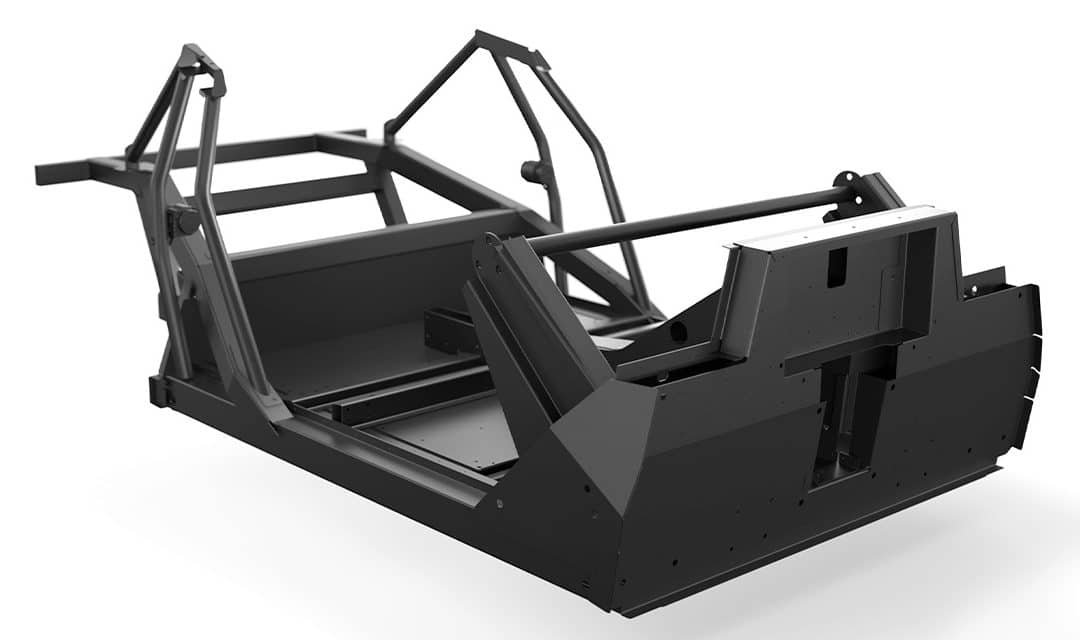 The first sample of a TWIKE 5 frame was built in the last days. The individual parts of the sheet metal shell structure were first joined with screws, providing an opportunity for final optimization. In the series, the aluminum sheet shells are bonded over their entire surface, which will again significantly increase the strength of the overall structure compared to a purely bolted design. The stiffness, which is already noticeable, is all the more impressive, even taking into account the low weight of the assembly, which currently weighs around 52 kg.

At the same time, the frame is only the response to the parts mounted on it and the forces acting through them. It carries and protects passengers and their luggage in the interior. It takes over the forces introduced from the suspension links and guides the loads of the weight to the bearing points of the struts. The rear-wheel drive pushes the acceleration forces into the frame via the rear trailing arms. When braking or recuperating, it pulls on the trailing arms, as it were. In contrast to the pure braking case, the engine braking torque introduced via the drive bearing is superimposed during recuperation. In the event of an accident, structural components deliberately deform and thus dissipate defined crash energy. The fact that the battery could be completely connected between the longitudinal members of the body as an additional sandwich not only reduces the height of the center of gravity, but also significantly increases the bending and torsional stiffness of the frame.

In addition to the structural rigidity, the selected shell design in aluminum sheet also fulfills other required properties in terms of a high degree of lightweight construction, excellent recyclability at the end of use and initially low investment costs for tools. Aluminum sheets and the holes required in them are laser-cut to size with high precision, edged with a high degree of automation and then fixed, glued and riveted in holding tools. The rivet ensures the accuracy of fit of the joint and holds the adhesive surface in the desired position during curing.

The fact that local increases in stiffness can be achieved, e.g. by adjusting the sheet thickness, without adapting a mold, is advantageous from a development point of view. Whether and at which points this will be necessary will be shown by the experience of the further build and the feedback from the driver test. We will report more about the further construction in a following article.

We look forward to your feedback on our TWIKE blog.